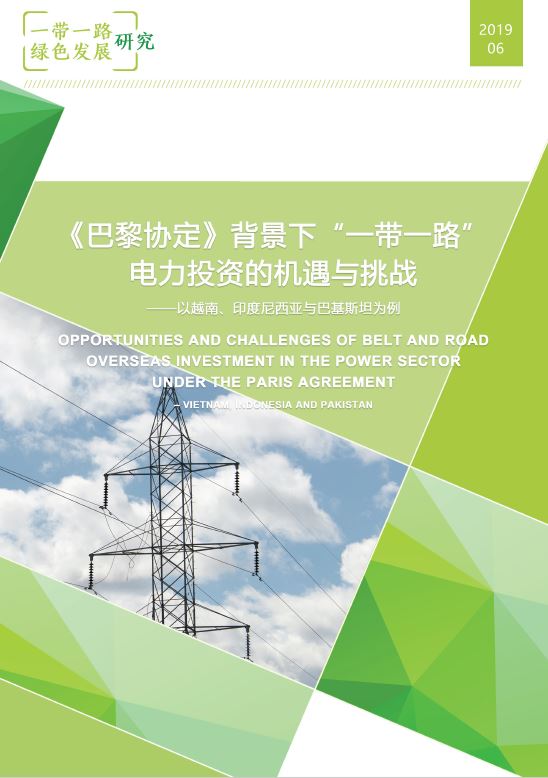 With Vietnam, Indonesia and Pakistan as country case studies, the report examines the opportunities and challenges of BRI power investment under the Paris Agreement, to provide recommendations for Chinese policy makers and investors to align BRI investments with climate targets in the near and long term.

The 2015 Paris Agreement aims to keep the increase in global average temperature to well below 2°C above pre-industrial levels and to limit the increase to 1.5°C, and to make finance flows in line with a pathway towards low greenhouse gas emissions and climate-resilient development. To achieve these goals, countries have developed and submitted Nationally Determined Contributions (NDCs) and proposed plans for domestic actions and international cooperation. Starting in 2023, the Paris Agreement will require countries to conduct a Global Stocktake every five years to review progress in global climate action, which will provide reference for countries to develop new and more ambitious NDCs. International cooperation could play a critical role in promoting the decarbonization of the global economy and the implementation of the Agreement's targets. In the context of the "Belt and Road" Initiative (BRI) launched by China in 2013, green, and low-carbon foreign investments to host countries in line with their climate targets will be key for China and the host countries to successfully create a "community with a shared destiny for humankind" and achieve the Sustainable Development Goals.

Asia plays an increasingly important role in addressing global climate change and in achieving poverty eradication and sustainable development goals. First, six of the ten countries most affected by climate change are in Asia, including Vietnam and Pakistan. Climate change has also exacerbated air pollution in Asian countries, creating more public health risks. Second, most Asian countries are still "developing" and "underdeveloped" countries. In these countries, electrification levels and per capita electricity consumption are still far below the world's average. At the same time, industrialization and urbanization also makes Asia the fastest growing region for global carbon emissions. Chinese investment through the Belt and Road Initiative in the Asian power sector is thus increasingly significant in scope.

This study examines the impact of NDCs on the development of the power industry. By using Vietnam, Indonesia, and Pakistan as examples, it aims to identify power investment baselines consistent with climate goals. This study also analyzes key areas for action to bridge the gap for reaching the 2°C target and provides a reference for Chinese policymakers and investors to formulate a low-carbon power investment plan consistent with long-term climate goals under the Paris Agreement for Belt and Road investments.