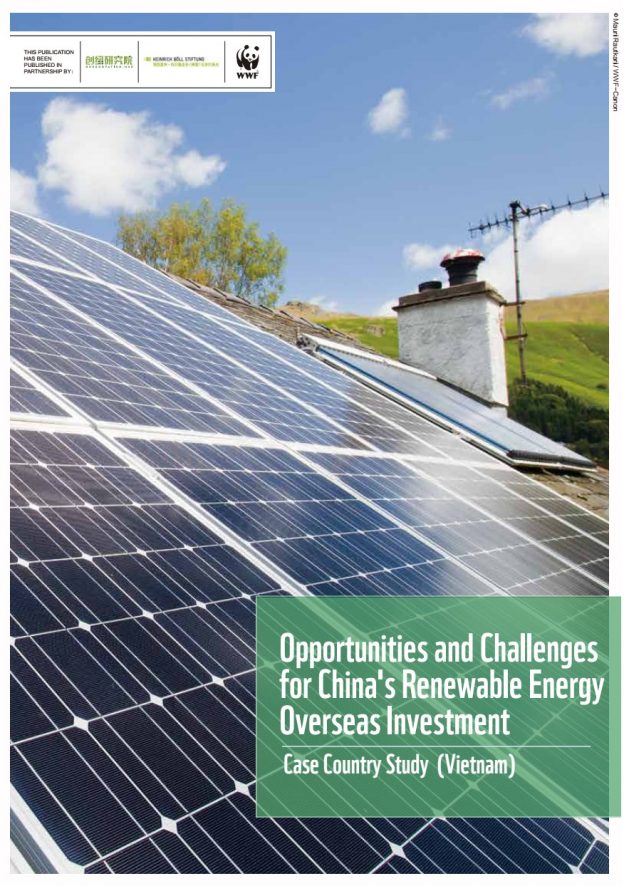 With Vietnam as an example, this report analyzes the status quo and trend of renewable energy and power planning, action against climate change, environmental laws & regulations and governance objectives, and cooperation with China in the field of energy and power under the BRI. It also discussed the barriers, risks and opportunities faced by China in its investment in renewable energy in Vietnam. While it also provides practical suggestions for the Chinese government, financial institutions, enterprises and the Vietnamese government on policy support, action is needed to promote China’s investments in renewable energy in Vietnam.

Against the backdrop of addressing climate change and achieving the goal of sustainable development, energy transformation and revolutionary change of energy system are imperative. Over the past decade, China has promoted the continuous decline of renewable energy cost through a range of policy measures and technological means, and also takes the leading position in the global renewable energy value chain as well as promotes the world to achieve energy transformation.

With the launch of the Belt and Road Initiative (BRI) and the deepening cooperation with the countries along the BRI routes, China captures increasing shares in renewable energy market year by year, becoming the largest international investor in the renewable energy sector. The BRI routes have also become the area with the fastest-growing demand for energy and power on a gradual basis under the development of economy and society. However, most of these countries are located in the ecologically vulnerable areas and have become more aware of improving the environmental governance and sustainable development. In this context, Chinese government has taken a series of measures to avoid the potential risks in environment, society, heath and stranded assets, in terms of outbound energy and power investment. Nonetheless, due to the imperfect political environment, laws and regulations system, investment environment and development planning of the countries along the BRI routes, there are considerable risks and challenges which have exerted an influence on China’s investment and cooperation in renewable energy along the BRI routes.

Vietnam has maintained rapid economic growth and achieved certain progress in socio-economic development. In addition to cooperation with other countries to actively promote the development of foreign trade, Vietnam’s rapid economic development also benefited from a large influx of foreign fund giving fresh impetus to its manufacturing industry. Vietnam’s average annual growth of GDP hit 6-7% in the past ten years. According to the statistical data released by the Ministry of Planning and Investment of Vietnam, the country’s GDP growth rate reached 7.08% in 2018, which reached the highest level since 2008, higher than that of other ASEAN countries. As an energy-intensive country with economy driven by energy, Vietnam is faced with serious ecological and environmental problems, such as environment pollution, deforestation, biodiversity loss and frequent extreme disasters caused by climate change.

Rich in fossil energy and renewable energy resources, Vietnam is one of the most efficient electricity markets in southeast Asia, and the domestic electrification rate is 99% in 2018. With the development potential of hydropower resources are mostly tapped, new electricity demand in Vietnam in recent years has been mainly supplied by new coal power which has become the largest source in the electricity generation mix of 38.22% (15.3% in 2011) in 2018. In terms of Vietnam’s current energy demand and energy mix, the greenhouse gas emissions in the power sector will continue to increase.

The Vietnamese government has introduced a series of policies to cope with climate change and achieve energy transformation. Vietnam promulgated the Law on Foreign Investment on November 12, 1996 and amended it on June 9, 2000 which provides a basic legal basis for foreign direct investment in Vietnam. It clearly provides the List of Encouraged Investment, List of Restricted Investments and List of Restricted Investment. According to publicly available information, Vietnam’s current green and low-carbon development policies mainly include: National Target Programme to Respond to Climate Change (NTPRCC) (2012-2015), National Target Program on Energy Efficiency NTPEE)(2012-2015), Vietnam Green Growth Strategy(VGGS) in 2012, Support Programme to Respond to Climate Change(SPRCC), The Green Growth Action Plan(GGAP)(2014-2020). Vietnam ratified the Paris Agreement in 2016, Vietnam’s NDC also made clear measures and actions to achieve the emission reduction target. Meanwhile, the Vietnamese government introduces a range of sustainable financial policies and guidelines, and the State Bank of Vietnam (SBV) has promulgated green financial regulations and guidelines, which are currently taken into effect.

Vietnam has abundant solar energy and wind energy endowment, according to the Vietnam Renewable Energy Report 2018, the actual installed capacity of solar energy is only 8MW, and the potential installed capacity can reach 7,140MW. The installed capacity of wind power is 189.2MW, and its development potential is about 26,763MW. According to the EVN annual report 2018, the renewable energy (including wind, solar, small hydropower and biomass)accounted for 7.16%(0.43% in 2013) in the electricity generation mix. According to the nation’s renewable development plan and strategy, the government plans to increase the renewable energy share in the primary energy supply from 15-20% by 2030 and from 25-30% by 2045, and increase the installed renewable power capacity from 9.9% by 2020 to 21% by 2030. To promote the liberalization and privatization of the electricity market, Vietnam has issued a series of preferential policies, including credit access, the exemption and reduction of taxation and land lease, as well as fixed on-grid pricing mechanisms for solar, wind and biomass power generation.  Despite the growth of both domestic and foreign investment in renewable energy and the gradual opening and liberalization of the electricity market in Vietnam in recent years, investors are still faced with a number of difficulties, such as economic barriers, laws, regulations and administrative management obstacles, financial and technical barriers.

This report analyzes the opportunities and risks by Chinese companies when invest on renewable energy in Vietnam. According to the publicly available information (by the end of June, 2019) of Chinese-involved wind and solar power projects, most projects have not entered into construction stage. In addition, the participation of Chinese financial institutions in renewable projects are quite limited. Based on the huge demand for foreign funds in the Vietnamese renewable energy industry, as well as the gradual improvement of Vietnam’s investment environment, laws and regulations on foreign investment, Chinese investors should utilize their investment strategies to further improve the renewable energy portfolio.

Meanwhile, this report also proposes recommendations that the Vietnamese government should promote the further improvement of industry policies and improve the investment environment. The Chinese government should further improve the energy investment planning, green and low-carbon cooperation with Vietnam. The Chinese financial institutions should establish and disclose industry investment strategies. And Chinese companies should actively carry out due diligence, and carefully study and abide by host country laws, regulations, foreign investment regulations, and sustainable development and energy strategies to reduce environmental and social risks.